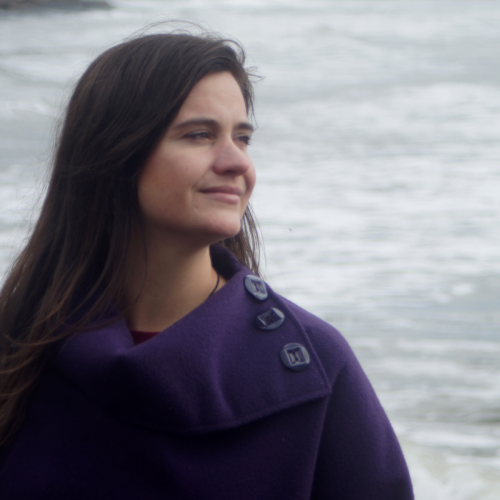 Originally from Fort McMurray, Alberta, Canada, Katrina was awarded music scholarships from a young age. Shaping her performance craft with plays, choirs, workshops, music programs, and competitions, she has also become a skilled guitarist and songwriter. Her versatile and powerful voice has been developed over years of classical and contemporary vocal training and recording.
One of her biggest transitions as a person and a musician came in 2007 when she spent three years in an off-the-grid historical homestead /garden located 33 miles North of Tofino. “I had all this time in complete wilderness to dedicate to my craft and listen to my soul… and that changes you,” she says. While there Kadoski created her most recognized show, “Cougar Annie Tales”, a critically acclaimed one-woman musical drama, telling the wild life story of the trapper-pioneer-settler woman who homesteaded in the rainforest bog. It won Pick of the Fringe, in Victoria in 2012, in Port Alberni in 2013, and was a Victoria Critics Choice nominee for “Best New Play.”
​
Katrina has played to many sold-out audiences around British Columbia.“Music has been a huge part of my life, I grew up listening to my grandmother sing, play fiddle, and accordion, and my father play guitar. I‘ve studied music, written songs, and been on stage since I was a kid.” She knows who she is and her unique style of indie-folk-pop displays her practiced voice yet reveals a raw edge to engage listeners and guide them through the threshold of healing. “Some of my songs are very personal reflections of people I am in close relationships with. Others are about my inspirations from digging into the cave of the heart and imagining the boundlessness of the soul”, she says.
In the last decade Katrina has created and performed live music in conjunction with many new works of theatre. Companies include William Head On Stage (W.H.O.S. – a theatre company inside a men’s prison). Sleeping Giants (2016), Here; A Captive Odyssey(2015), Fractured Fables(2014), and Time Waits for No-one; A Prison Play (2013). She also collaborated with Kate Rubin’s advanced teen drama school for the productions Metamorphosis (2013), Photophobia(2014), and Intrepid Theatre for I have seen Beautiful Jim Key (2015) – by Janet Munsil.
In the interest of maintaining skills and developing her own stories as a songwriter, She released a 7 song EP called “Dreamtime,” in 2016. Funded by a successful Kick-Starter campaign, this EP was recorded in Baltimore at the Wood and Stone Room. As a result of this recording, a wider fan-base has been developed, and had garnered positive feedback about the songs on the EP.
In 2017, she was asked to be an artist-in-residence at the Nelson Homestead, in Crisfield, ME, in order to create a project that ran along similar lines to her award winning, one-woman, musical-drama, “Cougar Annie Tales.”  During research in Chesapeake Bay area, a new song-cycle formed around the story of a historical female figure, Lilyan Stratton Corbin. She was the daughter of a local fisherman, and had led a remarkable life.  Katrina wrote 10 original songs about her; and created a one-woman show including 7 of those songs, entitled “The Waterman’s Daughter,” which was performed by Katrina, live on stage. Grants from Somerset Arts Council (Crisfield, MD) and
from Intrepid Theatre (Victoria, BC), contributed greatly to the development of this project. She toured the show again in 2018 along the Chesapeake Bay up to the Maritimes.
Most recently, on the songwriting front, Katrina has a recording project in the works with her five-piece band ‘The Edgedwellers,’ as well as a new solo recording.  “After the Shipwreck,” is produced by Jude Pelley and features an incredible host of Canadian talent!  Katrina will be releasing her new full-length album of songs as part of the Sooke Folk Society coffeehouse concert on Sept 19th 2020.
She also currently teaches music and yoga on Southern Vancouver island.
+ Google Calendar+ iCal Export